Lisbon the Beautiful, or Lisboa a Linda

During my stay on the island of  São Miguel in the Azores I had a few stopovers in the lovely old city of Lisbon during my travels between the island and Cape Town. I grew to love Lisbon and relish my all too brief visits, so when Elle and I had the opportunity to spend a couple of days there en route to the Azores, we jumped at it. I badly wanted to share at least a bit of this great place with her. We both thoroughly enjoyed our brief sojourn, even though the second day was rather wet because of an autumn rain!

The Rua Augusta, looking towards the arch called the Arco da Rua Augusta.

Looking along one of the cloisters facing the Praça do Comércio, on the left as one comes out from under the arch.

Arco da Rua Augusta as seen from the Praça do Comércio.

The oldest parts of the city are quaint and medieval, such as can be seen here, looking up the Arco de Jesus in the Alfama district. 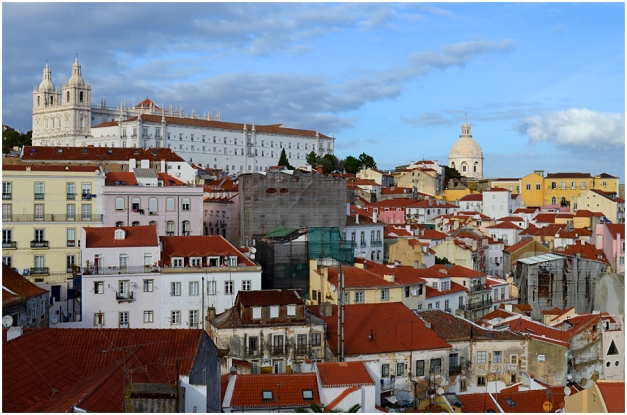 One of the city’s most famous look-out spots is the Miradouro da Santa Luzia, from where this view was taken. We look east, past the twin-towered church of São Vincente de Fora towards the dome of the Panteão Nacional. 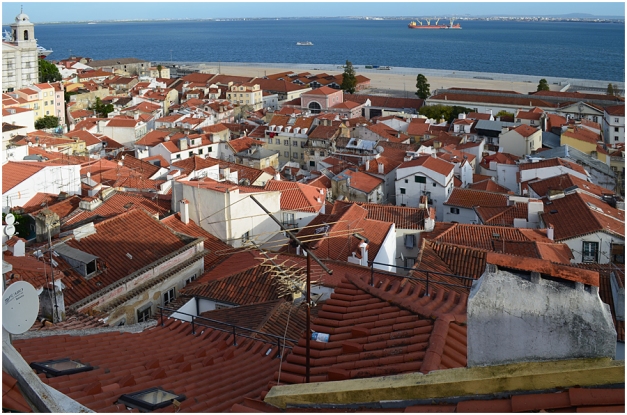 The River Tagus (Rio Tejo) lies in the background of this view over the Alfama, with the church of Santo Estêvão on the left.

Zooming in on the dome of the National Pantheon, formerly known as the Church of Santa Engrácia.

Further west along the Tagus, in the suburb of Belém, one finds the memorial to the Portuguese dicoverers, the Padrão dos Descobrimentos.

This map in the square shows the extent of Portuguese discoveries worldwide. 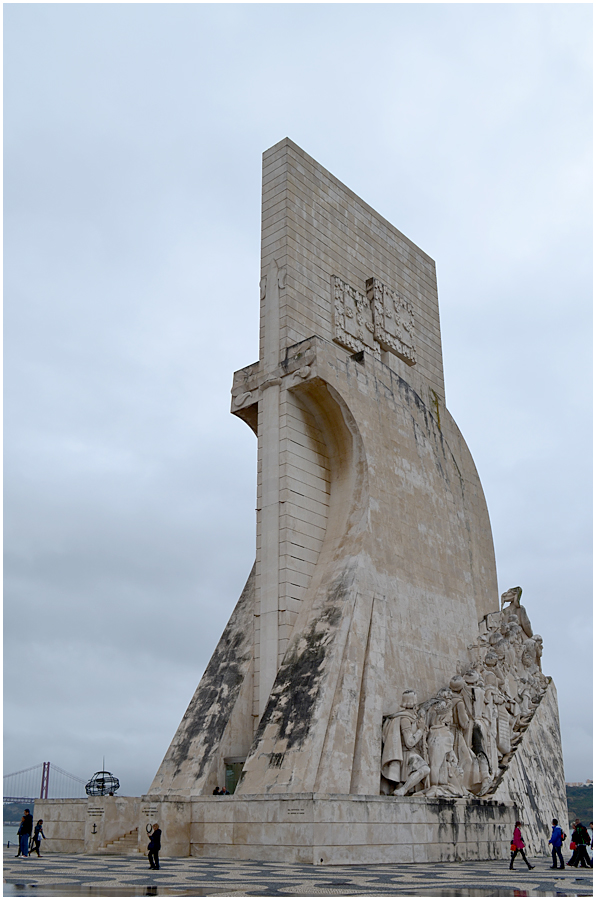 Another view of the Padrão dos Descobrimentos. 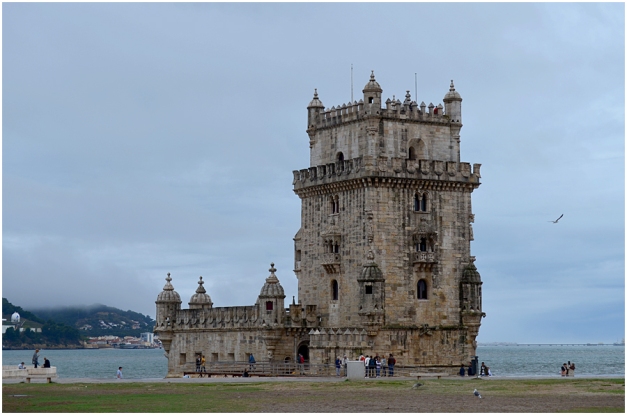 Nearby is the Torre de Belém. The tower was commissioned by King João II to be part of a defense system at the mouth of the Tagus river and a ceremonial gateway to Lisbon. Erected in the early part of the 16th century, it is today a UNESCO World Heritage Site.

Looking down from the top of the tower onto the ramparts. 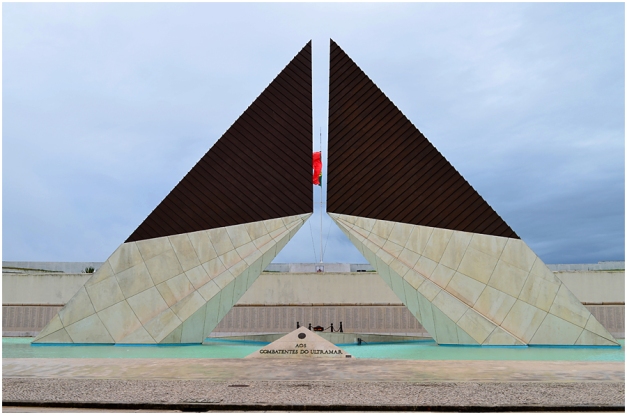 Just to the west of the Torre de Belém is the memorial to the Portuguese soldiers who died in the wars in Angola and Mozambique. 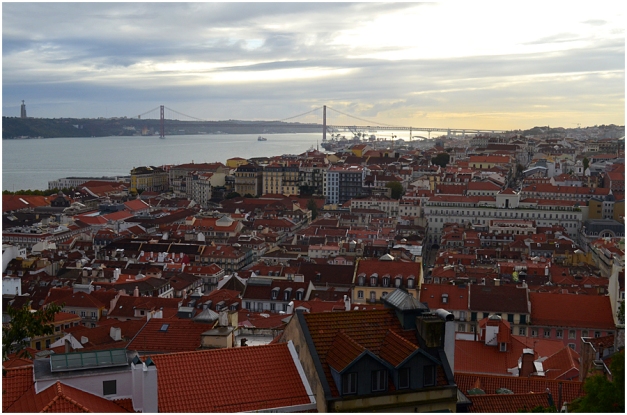 Here we are looking from the ramparts of the Castelo São Jorge, just above the Alfama district. The view is roughly west towards the river and the Ponte 25 de Abril, the bridge in the distance. Also visible on the far left is the statue of Christ the King at the Santuário de Cristo Rei. 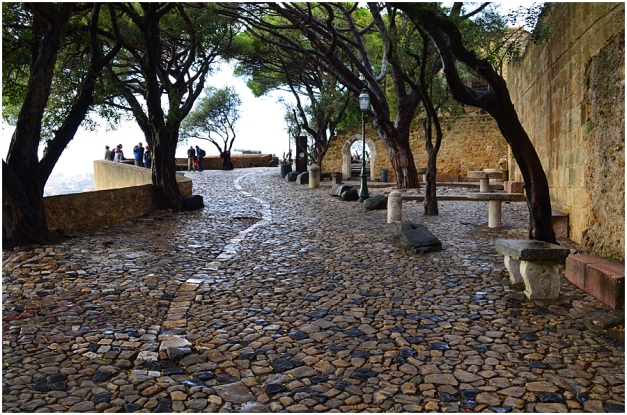 The western ramparts of the Castelo São Jorge. 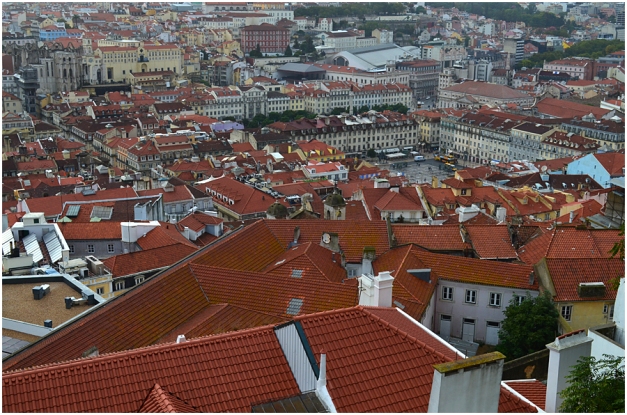 From the Castelo we look don on the Praça da Figueira (middle distance, right) and beyond it to the modern roof of the Estação de Caminhos de Ferro do Rossio (the Rossio station, not to be confused with the Rossio Metro station.)

We zoom in on the previous view to get a better look at the Convento do Carmo (ruins of the Carmo Convent), with to the left of it the Elevador de Santa Justa, a lift to get people from the lower level of the city in front of the convent to the higher level behind it. On the right of the ruins is the church Iglesia do Carmo.

Late afternoon, and we are looking west from the castle ramparts we see the distant dome and towers of the Basilica da Estrela.

Castelo de São Jorge. This is the entrance to the central keep of the castle. The castle was built by Moorish forces during the 10th century. 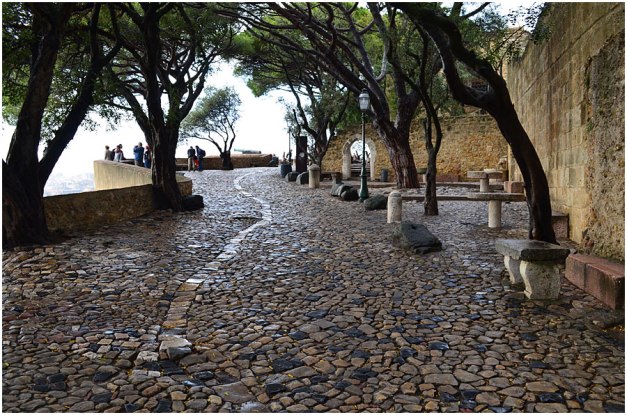 Once through the portals of the castle precinct, one can wander along the area between the castle walls (on the right here) and the ramparts above the city.

One of the number of cannon on the ramparts looks out over the Baixa. 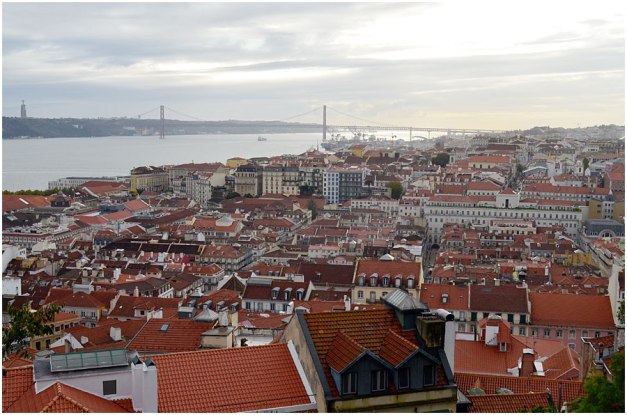 A wonderful view of the Baixa, with the River Tagus in the distance. The bridge is the Ponte 25 de Abril (25th of April Bridge to commemorate the1974 revolution which overthrew the ultra-right wing Salazar government). Built by the same company that built the San Francisco-Oakland Bay bridge, it was
completed in 1966. The upper deck carries six car lanes and the lower deck two railway tracks (added in 1999). At 2 277m it’s the 23rd longest suspension bridge in the world. Also visible on the far left is the statue of Christ the King, a 110m tall structure completed in 1959.

Here we look down onto the Praça da Figuiera (middle distance, right). Just visible beyond and slightly to the left is the Praça Dom Pedro IV (where the trees peep over the roofs). One also gets a glimpse of the modern roof of the Rossio railway station with its two narrow and one wide arches. To the left is the Convento do Carmo, which we see better in the image below.

The Convento do Carmo was a a convent erected for the Carmelite Order in 1389. During the catastrophic earthquake of 1755 the convent and its church were destroyed. The convent was rebuilt, but the ruins of the church remain as a memorial to the earthquake. On the left is the Elevador de Santa Justa
(Santa Justa lift), a lift (or elevator) built in 1902 to connect the Baixa with the much higher Largo do Carmo. Today it functions mostly as a tourist attraction.

From the north-western ramparts of the castle we look out over the Largo Martim Moniz (where the white marquees are). This square is named after a knight of the Second Crusade who, (according to legend) when Afonso Henriques and his forces attacked the castle, noticed that the Moors had not managed to close the castle gates completely and fast enough, so he threw his body between the two massive wooden doors as they were being
swung shut. He lost his life, but his sacrifice enabled the crusaders to force the doors and take the castle.

The inner castle or casteljo is much as it was seven centuries ago. Much of the original castle has been lost over the centuries, but this part remains. The moat is now dry. 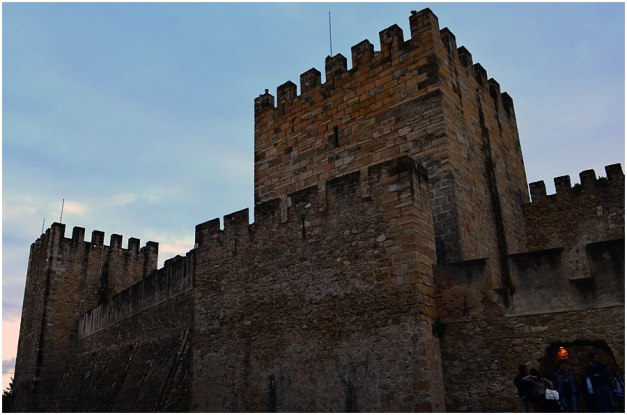 The main tower, Torre de Ulisses (Ulysses Tower) – previously known as the Torre Albarrã – was for many years where the Kingdom’s archives were held.

It was an indescribable sensation, walking along these battlements that have been here for over 700 years…

And, as the sun set over wonderful, beautiful, unforgettable Lisbon, we take a last look at two embrasures before heading off to our hotel to get ready for our very early flight to the island of São Miguel in the Azores the next morning…

For more details about the Castelo, click  HERE. These images are also to be seen on my website Ray’s Cam.

To love a pilot, you must learn to F.L.Y.

Words and Pictures from the Middle East & Balkans

“It takes a lot of imagination to be a good photographer."